Sometimes I’m at a loss as to what to blog about, but this month there is no doubt whatsoever. First and foremost in my heart is the Oxford Literary Festival, now in its 25th year (technically most probably now off on its 26th year, and, with planning already afoot, maybe its 27th), which closed last Sunday.

I have written about the Festival before, or at least made mention of it in articles and blogs, especially in those related to the uniqueness of Oxford as home and community. The Festival is such a special part of the Oxford landscape, like the University, that it is an institution that is entirely inseparable from the town itself. If it were missing from the calendar year, which it was for the past two years in physical form, with Covid rampant, it would be like turning onto Broad Street only to find the grand old Sheldonian Theatre gone.

This year’s Festival was a special one for me for a number of reasons. First, like everyone else, the rain stopped (no more weather-related lockdown) and the sun came out (we were free to roam). Second, every event I attended seemed especially crafted for me, my own work, the novel in progress I now have on my desk (officially my laptop on raised pillows in my super comfy bed). Third, I was asked to serve on a panel dedicated to American writers to discuss my second novel Geraniums. Finally, perhaps because the second novel is out and the third is garnering attention, I am connected to the Festival as an author, reader, lucky Oxford resident and British citizen—which brings me to the all-important question: what is the benefit of a literary festival?

I used to (ancient history) put literary festivals in the same category as food fayres or petting zoos. Who did that, who went there, and what on earth for? So boring. Dusty old men with dusty old books that I wouldn’t be reading anyway. Well, I have since been to the odd food fayre and petting zoo—children can take you to all sorts of places you never thought you’d go. While I initially envisioned a food fayre as Aunt Marni’s (almost out of date, failed to sell) jars of hand labelled, pickled kimchi or free samples of overhandled (stale) chocolate sourdough rye, I found out differently, when whole families arrived, spreading picnics out on lawns, cavorting or participating in the Easter Bonnet parade: they had fun.

As for petting zoos, I may be overstating the obvious: rank unchanged straw reeking of, well—ammonia. However, this perception changed the day my then young son went quietly into a pen in Patagonia with a ginger-haired guanaco. The keeper explained that the llama-like animal had been badly injured, had lost its mother and so the zoo had adopted it. My shy and quiet child embraced this animal, looked up at me, and said, “Mum, take this, this photo, me with him.”

So what do food fayres, petting zoos and literary festivals have in common? Certainly not stale concoctions and old goats; they share fun, insightfulness and family times. Booker Prize winner Dame Penelope Lively, the 89-year-old author who has just hung up her writing skates, turned when I asked, “When do you know the research on a book is done?” With a learned stare, as if it were obvious, she said, “When”—pause—“I am saturated.”

The benefits of such wisdom? A fellow attendee spoke softly, “It’s gold dust, and practically for free.”

Oxford’s many faceted jewel of a festival provided “fun” for everyone: the author (cerebral as we may be), the reader (more critical to the process than anyone), the aspiring writer (who keeps it green), the politicians (who woo a crowd anywhere), and finally a chance for all to meet, which can’t be anything other than enjoyable in an industry when so much of the work is done alone and separated. My hat is off to Sally Dunsmore and Anthony “Tony” Byrne, the two people who make this amazing event happen, and without whom something would be missing when I make that right-hand turn on the corner of Parks Road and onto Broad Street. 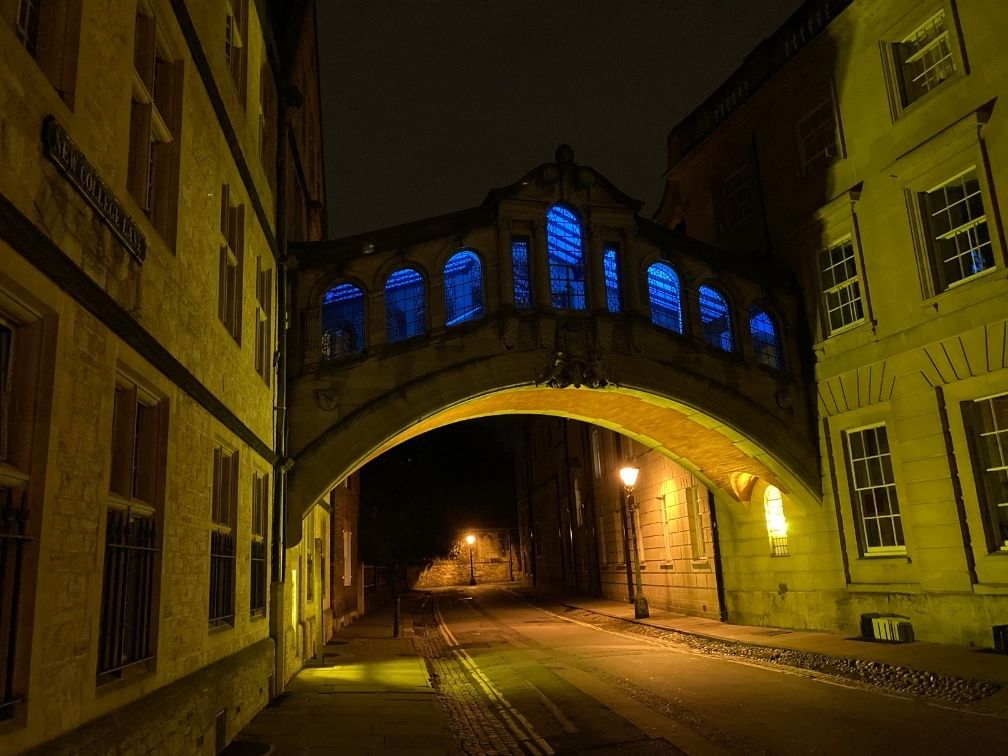 The Bridge of Sighs, Oxford, in support of Ukraine

Who could have imagined on the final evening, something very much less than frivolous, at the FTWeekend Lecture, when MP Tom Tugendhat spoke with Financial Times editor Alec Russell about Ukraine, a no fly zone and when “push might come to shove”? Would it be Putin’s use of chemical or nuclear weapons? Perhaps it was just my imagination, but it seemed foreign affairs expert Tom did nod. I might have been sitting in my own living room, despite the immensity of the Sheldonian; such was the intimacy of a “conversation” at the Oxford Literary Festival. 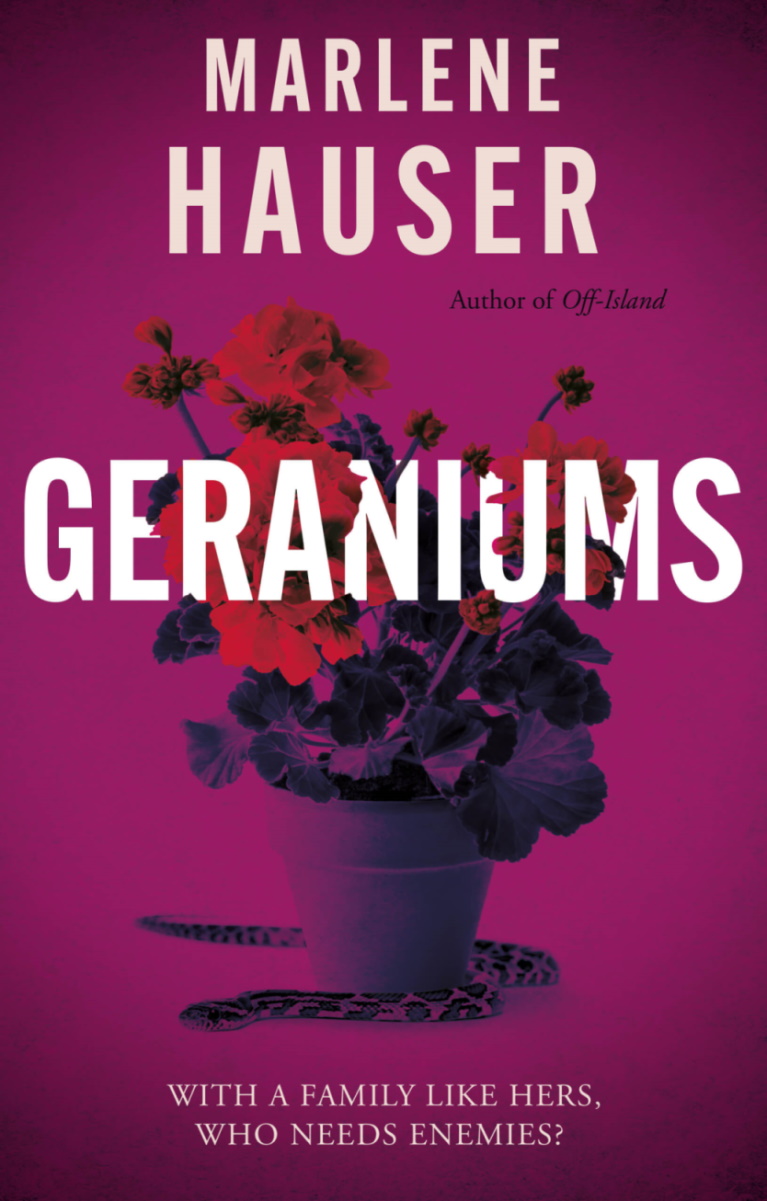 Lily’s life is a struggle. Geraniums is a beautifully written
…
and compelling literary fiction that I thoroughly enjoyed. Marlene Hauser has a style that ensnares the reader because of her ability to step inside the minds of her characters and enable the reader to experience, through them, the events of the novel. There’s a painterly writing style too, with descriptions that place the reader at the heart of the narrative. The plot is elegantly wrought, with Lily’s perspective leading the reader through the events of her family’s life in such a realistic way that it is clear any generic family could be just as dysfunctional, controlling and abusive as Jack’s so that Geraniums makes the reader realise that we never truly know those around us or understand quite what they may be capable of doing.

Linda Hill
Linda's Book Bag
“Once again the beauty of the words you penned touch
…
my soul… recalled for me the lines from T.S. Eliot’s “Little Gidding”.

Baroness Soujata
London
“Your newsletter never fails to inspire and stimulate ideas! I
…
really enjoy every one of them, and several still linger with me months later… Very touching.. continue to inspire me!”