Hi Everyone, I am often asked how Oxford, England became my hometown, so I thought as I’ve recently written an article for the Oxford Times (24.1.19) on the same subject, I’d share the unabridged version of that article with you. I first came to Oxford in 2011 when my son started to attend Summer Fields School and my husband decided to reinvigorate The Manor, Weston-on-the-Green, a country house hotel. Moving into the iconic Summertown Villa was, and still remains, an honor and a privilege. One of the first things I noticed about living in Oxford was that I couldn’t step out of my front door without falling over an author—famous or otherwise. Summer Fields alone had countless connections with writers, documenting every aspect of the school’s 150-year history.  And who could bear to pass up on the Oxford literary scene? Not me. I bought affordable tickets to every author appearance I could attend, from events at the Oxford Literary Festival to signings in Blackwell’s, falling evermore in love with my new hometown and the endless literary opportunities it offered as I did so. Who haven’t I seen and heard here, from Anita Shreve to Philip Pullman? Being able to pop into Blackwell’s and catch Misha Glenny, author of McMafia, the book that inspired the gripping British television drama of the same name, felt almost surreal to me. Did he ever fear for his own life in the same way? And sitting with my son, listening to Michael Morpurgo talk about War Horsein the Sheldonian, I had to ask myself, “Does it get any better?” Awed by encounters like these and already living in a writers’ paradise, I decided it was time to resume writing myself—in sheer self-defense! In the past I had studied for an MFA in Creative Writing from Columbia University in New York, which had led to my work on The Writer’s New York City Source Book and Under the Influence, a highly rated television drama. Who better to reawaken my literary mojo than local writer and tutor Rebecca Abrams? The inspiration gained from her Oxford University Continuing Education course, with its invigorating exercises and incisive critiques, was invaluable. Around the same time I met another Oxfordshire writer, who had just published her first novel. This author introduced me to Matador, part of Troubador Publishing, and the rest is history. They published my novel Off-Island in paperback last September. The book is set in the 1980s, the era in which I wrote the first draft. Of course, since then the world has changed radically in many respects, not least the publishing landscape where there has been seismic change. Twenty or thirty years ago no one would have thought of self-publishing, and yet today according to some media authorities it is the way forward, along with maintaining an author website, a social media presence and having “a platform”. Off-Island is my attempt to capture one young woman’s coming of age. First and foremost, it is about having the right to choose. The book takes the reader from New York City to Martha’s Vineyard and back again, on a journey in which a privileged heroine, hoping to escape her private pain in self-imposed isolation, discovers that her family history isn’t quite what she’d imagined. I hope readers enjoy reading Off-Island as much as I enjoyed writing it and finally bringing it to publication. The Kindle edition was chosen as a Kobo summer read. Working with Troubador has been a seamless process, as has been working with the phenomenal, world-class editor Lynn Curtis and liaising on occasion with Oxford-based copywriter Tamsin Shelton and book designer Karin Fremer. My social media guru, Soni Speight, is another Oxford wonder. Now with a website, a blog, Twitter, Instagram and Facebook, I finally have the requisite “platform” and can honestly say the success of Off-Island is truly homegrown. And did I mention fun? Most of the talent, expertise and support I needed were to be found literally in my own back yard. Perhaps moving to Oxford should come with a stern warning: Beware—you too might become a writer by osmosis. Finally, most exciting—and in my own backyard—is the invitation I recently received from the FT Weekend Oxford Literary Festival organizers to participate in a panel discussion with another first-time novelist, Alex Reeve, author of the extraordinary and unforgettable The House on Half Moon Street. Please bring your questions and come and join us on April 7th at 2 p.m. at Cross College, Oxford University, Oxford, England.  Enjoy your March, and maybe take a bit of time to celebrate your own hometown, 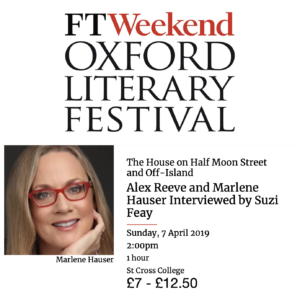