They hovered over the bassinet together. “Name her,” ordered the nurse.

Jack stood, looking the baby over. She had his blue eyes, he saw. Was one of them maybe still kind of unfocused? Must be a baby thing, he decided. Same sort of hair as him, blonde and lots of it. The nurse said that was rare for her age. Her cheek looked kind of flushed too, just one of them. Maybe she’d been lying on it. Then it came back to him, first in a light refrain, and afterwards loud and clear, an old soldier’s song. He knew all the words by heart. How many times had it gotten him through a long night on sentry duty? My God, he thought, I learned it when, scared to death, sitting in a wet, dark trench, none of us imagined getting home. Everyone knew ‘Lili Marlene’. He sang the words softly to himself, remembered the song about the soldier imagining his girlfriend waiting for him in the lamplight.

Yes, he thought to himself, that’s it. He continued humming, letting the little girl curl her fingers around his thumb.

“Could I hold her?” Jack asked the nurse. 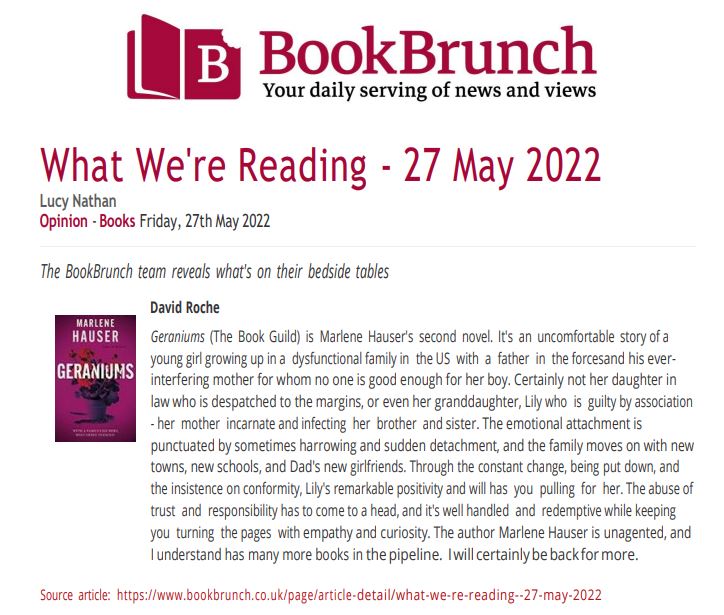 What would M think? He didn’t care.

Jack thought hard. He was a war strategist. That was what they trained him to do. Who was the most significant person to him? He ruminated, thought back through all the books, the training. Who did he admire most? It came to him in a flash.

“Yes, General Robert E Lee,” Jack said, as if she should know. “The most famous general in all the world. Why? He won the Civil War by surrendering.”

A lecture on tactics was more than the nurse had bargained for. She frowned.

“Don’t you get it? When he saw that one more battle would cost not only him, but the other side too, more men than it was worth, he surrendered.”

“It was the mark of a great leader. For him the men came first. To surrender. To know he got it wrong.”

“I’ve heard worse,” the nurse said under her breath, but now at least she could fill out the birth certificate.

Jack strode out of the hospital, proud of himself, thinking repeatedly that Lily Lee could just be the first female general.

Back home at last, Lauren Rose perked up considerably. She had Margaret by her side again, and Sean had come down to visit. Now this, she thought, is what I really need and want: my family. They laughed and talked a great deal, and took turns feeding, bathing and rocking the little ones.

I screamed a lot. In fact, for hours and hours, and days on end, I never slept. No one was quite sure when the wailing turned to chatter.

“What’s that?” people would ask.

“Oh, that?” my parents would respond, looking at each other. “That’s Lily. She talks to herself, all day long.”

I had my head up before they knew it, and at eight months managed to scale the side of the hand-me-down crib passed on from my sister. They labelled me dangerous and pulled out the old playpen, with wooden railings, deep sides and a metal safety latch. This I liked. I could roll in it, I could kick, I could really let my vocal cords rip. I could throw fits. I could finally get what I wanted: a warm, wet kiss.

No one was really surprised when the chatter became clearly formed words, but what did surprise them was what I said first. I did not say the melodic-sounding, pleasant humming M-word, Mommy, or the harsher D-word, Daddy, or even a lighter sounding Da-da-da. I would roll on my back and look up at the most lovely pair of eyes in the whole world. They were gold, with tiny flecks of soft brown. Her hair was mostly ginger. She had the most mesmerising nose. Her ears meant hours of distraction for me. She never left my side, and I clung to her shiny collar. She was my guardian and protector. She loved to tickle me, make me laugh and babble. My constant mediator with the world, she would ply me with endless affection. Who could have had it any better?

She never grew tired, and I could say her name forever. In fact, I called it out non-stop to the rest of the world, to whoever would listen.

“Mayday, Mayday, Mayday,” I shouted, and the Brittany spaniel, named after the international call for distressed ships, came at once.

Ironic, really, that my first baby words should have been a madly repeated call for help.

A Review of Geraniums

It’s an uncomfortable story of a young girl growing up in a dysfunctional family in the US with a father in the forces and his ever-interfering mother for whom no one is good enough for her boy. Certainly not her daughter in law who is despatched to the margins, or even her granddaughter, Lily who is guilty by association – her mother incarnate and infecting her brother and sister.

The emotional attachment is punctuated by sometimes harrowing and sudden detachment, and the family moves on with new towns, new schools, and Dad’s new girlfriends. Through the constant change, being put down, and the insistence on conformity, Lily’s remarkable positivity and will has you pulling for her. The abuse of trust and responsibility has to come to a head, and it’s well handled and redemptive while keeping you turning the pages with empathy and curiosity.

The author Marlene Hauser is unagented, and I understand has many more books in the pipeline. I will certainly be back for more.

My Review of Geraniums

Lily’s life is a struggle.

Geraniums is a beautifully written and compelling literary fiction that I thoroughly enjoyed. Marlene Hauser has a style that ensnares the reader because of her ability to step inside the minds of her characters and enable the reader to experience, through them, the events of the novel. There’s a painterly writing style too, with descriptions that place the reader at the heart of the narrative.

The plot is elegantly wrought, with Lily’s perspective leading the reader through the events of her family’s life in such a realistic way that it is clear any generic family could be just as dysfunctional, controlling and abusive as Jack’s so that Geraniums makes the reader realise that we never truly know those around us or understand quite what they may be capable of doing.

The characterisation is a triumph. I wanted to loathe Jack completely and yet Marlene Hauser made sure I understood why he and his vile mother Emma behaved the way they did so that both of them gained my sympathy on occasion, even as I wanted their complete destruction and downfall. The desire for public recognition and personal affirmation after abusive and traumatic pasts is so clear in their behaviours that I think reading Geraniums gives a clarity to the reader about how we shouldn’t be too quick to measure, judge or respond to others.

I loved Lily unreservedly. That’s not to say that she isn’t flawed, being stubborn, duplicitous and devious at times, but again it is circumstance that makes her as she is so that she feels alive and vivid. I was desperate for her to succeed. Although Geraniums spans many years and has quite an extensive cast of secondary characters, it always feels intimate and intense, because each person encountered along the way adds depth to the narrative.

I thought the title Geraniums was inspired. I have no idea if this was deliberate, but with the symbolism for geraniums being happiness and friendship, this is exactly what they represent for Lauren Rose, being literally smashed to pieces even as her dreams are being metaphorically destroyed. Geraniums can also represent cleverness and ingenuity – both traits that Lily has – so that this book feels carefully and meticulously crafted. Not a word is wasted in Marlene Hauser’s exquisite prose.

Whilst the themes of Geraniums are dark and disturbing with abusive relationships and violence at the core, this is not a depressing book. Rather, it feels tender and insightful because, through Lily, the reader finds positivity. Poor mental health, manipulation, coercive relationships, PTSD and crime are certainly major themes, but so too are strength and resilience, loyalty, determination, endeavour and success so that it feels as if all life can be found between the pages of this slim novel.

I really enjoyed Geraniums. It’s one of those stories that remains with the reader long after the book is closed, making them think about its characters and themes and wonder what is happening to them now. Geraniums deserves a wide audience because it is a piercing insight into humanity and what makes us who we are. Don’t miss it. 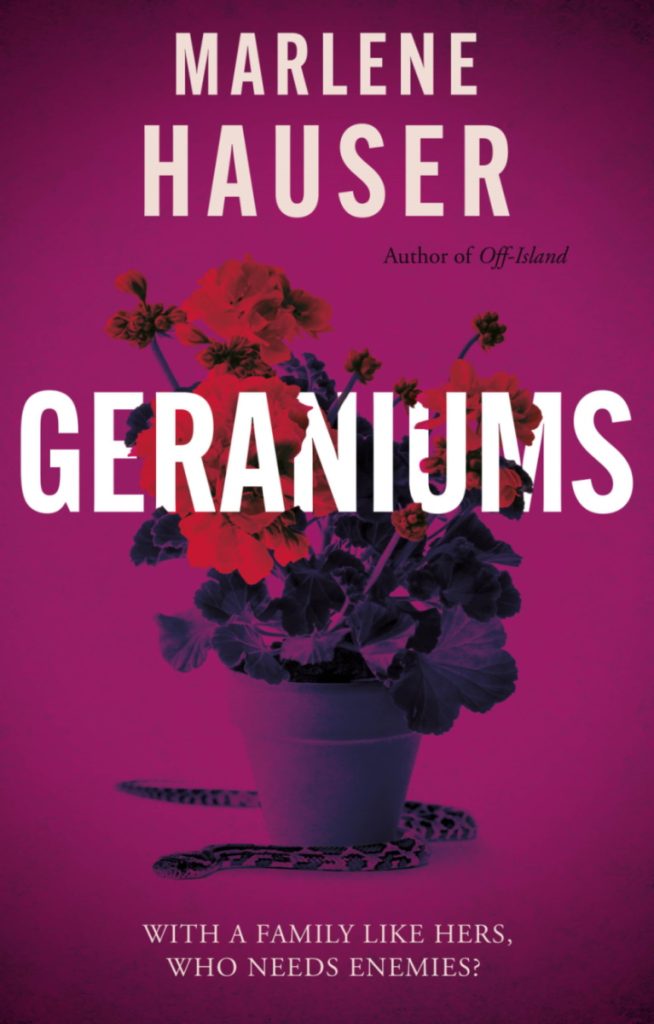